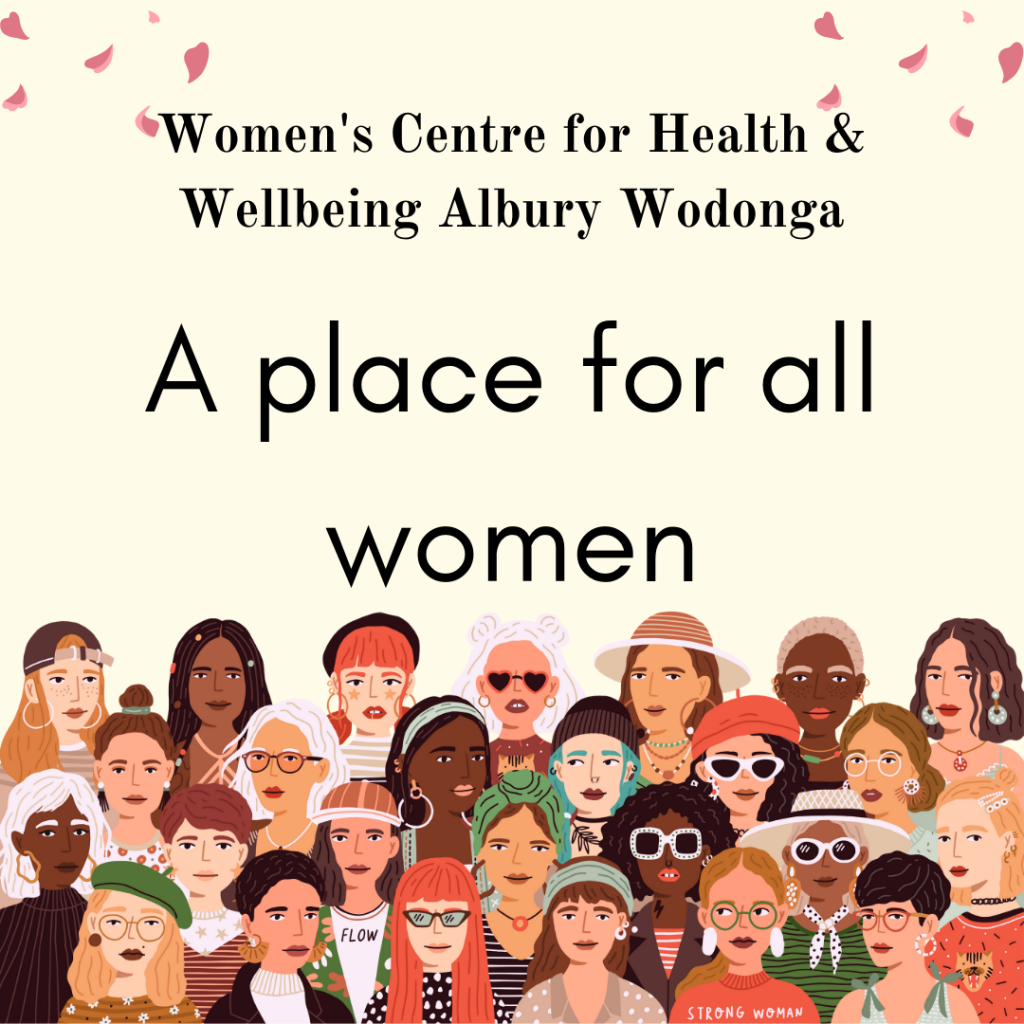 The Women’s Centre provides services to Women in the Albury Wodonga Community since 1986. We are a not-for-profit, non government organisations. We provide services for all women and people identifying as women, and welcome older women, migrant women, women with disability, gender diverse, gender neutral and Trans people and young women above the age of 16 yrs old.

Our mission is to provide women with a safe place to come to seek either free or affordable services.

We have counsellors that support women who have experienced trauma, historical sexual assault, domestic violence, or are in need of support and assistance

Intake and Referral is available to support women leaving a violent or abusive relationship. We can support and refer you to a wide range of external and internal resources.

Other services include NILS (No Interest Loans Scheme), Hume Riverina Community Legal Service, Therapeutic Groups and more. Check our menu above for the complete list of services

A letter was received from the Victorian Women’s Advisory Council to the Premier. In the letter the Council lent support to the idea and spoke of country women being at a disadvantage in respect of support of information made available to them.

The interim steering committee met to discuss funding. A submission was made for some funding from the Department of Health (NSW).

An article appeared in the Border Morning Mail titled “New Women’s Health Centre on the Way”. Funding had been granted to the Centre to the amount of $50,000. A letter was sent out to Committee members to have a meeting to organise use of funds, and in which direction the centre was to go.

A general meeting was held, at which the decision was made for the Women’s Centre to become incorporated. A name was chosen that would be easily found in directories and guides “Women’s Centre (Albury-Wodonga) Inc.”

An opening meeting was held to draft a constitution for the Centre. Job descriptions and employee roles were also discussed.

The first edition of “The Broadsheet” was published and sent out to members and other interested parties. It detailed committee members; the new premises; the new coordinator; the second position at the centre; the centre’s functions and the need for help from the community.

A letter was received from the Council of the City of Albury, giving permission for the property at 645 Olive St, to be used for the purpose of the Centre. The position of part-time research officer at the Women’s Centre was advertised, and a housewarming party planned for the 9th November 1986.

A proposal was put forward for opening hours of the Centre to be Monday, Wednesday & Friday 10- 4pm, and Tuesday & Thursday 1pm-7pm: a total of 30 hours open per week. The services to be provided were: Local Community Information (LOCOM); health information; support and referral; group rooms; rest centre; drop-in and appointments with the Women’s Health Nurse.

The WOMEN’S CENTRE ALBURY-WODONGA Inc. opened its doors to the public for the first time.